** LEATHER **, **BLUETOOTH**, WE NEED YOUR TRADE, AND WILL PAY MORE TO GET IT!!!, Sync Voice Activated System, NO DEALER FEES, ** REAR CAMERA**, ** LOCAL TRADE**, Dual front side impact airbags. 3.5L V6 Flex Fuel Ti-VCT Odometer is 47938 miles below market average! THIS VEHICLE COMES WITH WARRANTY! Mullinax Gold vehicles get the reassurance of a 110-point inspection/reconditioning, 60 day/unlimited mile warranty, and a complete CARFAX vehicle history report! This vehicle also comes with a 5 DAY/300-MILE EXCHANGE POLICY. JUST ADD TAX! At Mullinax, there are NO DEALER FEES! We save you over $900 vs. Our largest competitors every day! 4,000 vehicles to choose from!

Model Overview
The 2015 F-150 has to be many things to many people, from work truck, to cruiser, to offroad vehicle, to boat hauler; there is an F-150 for virtually every task. As a result, the lineup is diverse. There are four engines available on the F-150, five trims and with several body options.
The most basic engine is a 3.5L V6 which produces 283 horsepower and 255 foot-pounds of torque, allowing for a tow rating of 7600 lbs, which bests other competitors when equipped with their basic V6 engines. The next step up is a 2.7L turbocharged V6 making 325 horsepower and 355 foot-pounds of torque. A bigger 3.5L turbocharged V6 makes 365 horsepower and 420 foot-pounds of torque, helping the F-150 rate a class-leading towing spec of 12,200 lbs. The top of the line 5.0L V8 makes 385 horsepower.

Trims include XL, XLT, Lariat, King Ranch and Platinum. The basic XL trim is available with three different cab sizes and three different bed lengths in either 2WD or 4WD configurations. Owing to its work-truck pretensions, the XL is relatively light on bells and whistles, with just basic utilities like an AM/FM radio and a 4.2" screen in the center stack.

The Platinum version is the urban cousin to the King Ranch trim. Like the King Ranch, it's only available with a crew cab and the 5.0L V8 engine. It also features a voice-activated navigation system, unique 20" polished aluminum wheels, LED side mirror spotlights, power deployable running boards, aluminum interior trim and a leather wrapped and heated steering wheel. 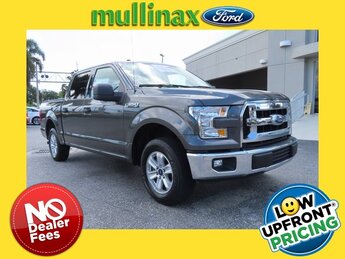 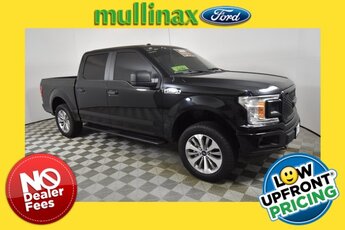