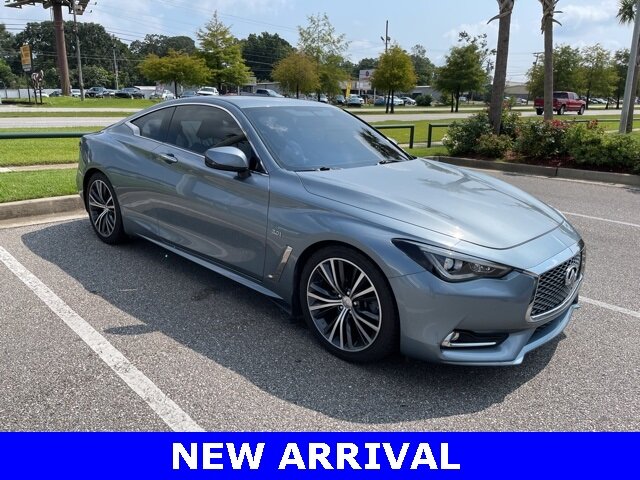 Model Overview
At the heart of every sports coupe is its engine. Infiniti offers the Q60 with a trio of different turbocharged engine choices. 2.0t models feature a 208 horsepower 2.0L inline 4-cylinder engine. 3.0t models predictably utilize a 3.0L engine, this time with 6-cylinders and a turbocharger, making 300 horsepower. Top of the line Red Sport 400 models also use a 3.0L turbocharged 6-cylinder engine, however power has been upped to an even 400, providing extremely strong acceleration at any speed. No matter the engine choice, buyers will get a 7-speed automatic transmission sending power to either the rear wheels or to all-four wheels, as each trim level also has an all-wheel drive version.
The Infiniti Q60 comes in four basic trims, 2.0t, 2.0t Premium, 3.0t Premium and Red Sport 400. Being a luxury coupe, even the base 2.0t comes generously equipped. Standard equipment on the base model include LED fog lights, headlights and brake lights, remote keyless entry, push button start, dual zone automatic climate control, a sequential welcome lighting system, leatherette seating surfaces, 8-way power adjustable front seats, a leather wrapped steering wheel, satellite radio and not one, but two LCD touch screens, the upper one being 8-inches and the bottom one being nearly as large at 7-inches. Voice recognition, a rearview monitoring system and an alarm are also included.

The Infiniti Q60 Red Sport 400 takes things to the next level. With 400 horsepower, the 400 Red Sport is a truly fast car and plenty of exterior styling enhancements show off to the world just how serious the Red Sport is. It gets unique 19-inch wheels, upsized, red painted brake calipers, red "S" badges and bigger exhaust tips. Inside, the Red Sport gets steering wheel mounted paddle shifters, leather seats, carbon fiber trim, aluminum accents and a power tilt and telescoping steering wheel. The Red Sport also comes with computer controlled dynamic digital suspension, which should make the car handle on rails.